"I will read you their names directly; here they are, in my pocket-book. Castle of Wolfenbach, Clermont, Mysterious Warnings, Necromancer of the Black Forest, Midnight Bell, Orphan of the Rhine, and Horrid Mysteries. Those will last us some time."

"Yes, pretty well; but are they all horrid, are you sure they are all horrid?"

Isabella Thorpe and Catherine Morland in... 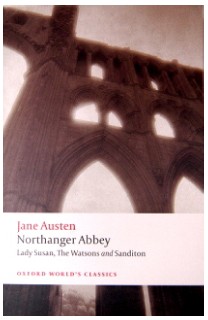 It's been quite a long time since I've posted about our meetings at the Sacramento library, and I almost gave up on finishing, but I've decided to carry on. This post is the lecture given by Dr. Jason Gieger on Gothic literature!

So what is it that makes Gothic novels horrid?

To understand this Gothic genre it greatly helps to define terms:
"The Sublime" largely defines Gothic literature, which was written in the latter half of the 1700s. Gothic authors use the sublime to create a certain feeling in their readers, a feeling of smallness in an infinity, along with imagining fear and torture from a distance.

You can see how Ann Radcliffe creates this feeling, gives us a sense of the sublime, in Udolpho as she paints a picturesque scene :

Some great illustrations of what "the sublime" looks like can be seen in some paintings done in the 1600s and at the turn of the 19th century. Dr Gieger showed us a number of them in his slides, and I must say they certainly made me feel my smallness!


Do these paintings make you feel your smallness in an infinity? Or at least the smallness of the people in the paintings? The last one here by Casper Friedrich is an especially vivid example! I can see Catherine Morland having this in her head - maybe as she's reading The Mysteries of Udolpho.

The paintings also illustrate the rules of "the picturesque," defined as "beauty with a touch of wildness."

Seeing the "sublime" and the "picturesque" in the art above can shed some light on why in Northanger Abbey, after Henry explains art to Catherine, telling her of

she was able to understand the concepts of picturesque art and,

"when they gained the top of Beechen Cliff, she voluntarily rejected the whole city of Bath as unworthy to make part of a landscape."

You see, wildness in the landscapes of the paintings above, and in any picturesque landscape, would not include orderly patterns and straight lines, and the city of Bath most certainly did include orderliness and lines. Bath was quite un-picturesque!


An important influence on the sublime and picturesque movements is Edmund Burke's A Philosophical Inquiry into the Origin of Our Ideas of the Sublime and Beautiful. Dr. Gieger shared part of this quote from Burke's writing:

[On buildings:] "I think then, that all edifices calculated to produce an idea of the sublime, ought rather to be dark and gloomy, and this for two reasons; the first is, that darkness itself on other occasions is known by experience to have a greater effect on the passions than light. The second is, that to make an object very striking, we should make it as different as possible from the objects with which we have been immediately conversant; when therefore you enter a building, you cannot pass into a greater light than you had in the open air; to go into one some few degrees less luminous, can make only a trifling change; but to make the transition thoroughly striking, you ought to pass from the greatest light, to as much darkness as is consistent with the uses of architecture." [Emphasis is the quote Dr. Gieger shared.]

The sublime is aimed at the passions, it affects the feelings. This use of the sublime in novels shows the shift in literature that was happening in Jane Austen's younger days. Before she was born the literature was very realistic with everyday heroes, and took place in England. But in Gothic literature - which loved to use "the sublime" - stories took place in France, Italy, and even the Orient! Books went from having titles like Clarissa and Tom Jones to having exotic titles like The Castle of Otranto, Vathek, and A Sicillian Romance. These titles create much more of a stir in our passions than a title like Pamela, don't you think?

Authors who are famous for their use of the "sublime" are:
*An interesting note: Mrs. Radcliffe wrote The Italian as response to The Monk, to correct Matthew Lewis's overdoing Ambrosio the monk as a character who was too over-run by his passions.

The plot of The Castle of Otranto by Horace Walpole is one of the most hilarious I've ever heard of. I won't give it away, but it involves a giant helmet...

"Shocked with these lamentable sounds, and dreading he knew not what, he advanced hastily, - but what a sight for a father’s eyes! - he beheld his child dashed to pieces, and almost buried under an enormous helmet, an hundred times more large than any casque ever made for human being, and shaded with a proportionable quantity of black feathers."

It's no surprise, then, that he lived at Strawberry Hill, a Gothic fantasy house:

You can see more pictures and find more information on the house here: www.strawberryhillhouse.org.uk.


What is quite revealing about Mr. Beckford is that he was heavily involved in the Abbey's design. So, it's not surprising that someone who could dream this up wrote Gothic novels!

The Gothic genre reflected a sort of shift in English society in more than just literature: also in the area of the situation of women. The women authors seemed to be making a point in often writing of women who were trying to escape from something. (In contrast men authors wrote of men exploring.) This implies, in Dr. Gieger's presentation, that it was probably a common thing for women to at least feel like they were confined in many ways in their society, by men and by circumstances, specifically. This wasn't an area that had been questioned in popular literature in England before (as far as I know).

"But, though it was certain, that she had herself no longer a home in France, and few, very few friends there, she determined to return, if possible, that she might be released from the power of Montoni, whose particularly oppressive conduct towards herself, and general character as to others, were justly terrible to her imagination." From The Mysteries of Udolpho


While we're studying Gothic literature it can be easy to forget that Jane Austen wrote Northanger Abbey as a parody of the Gothic novel. That is what I will look at in the next NA post, using the discussion we had at the library meeting.


"No one who had ever seen Catherine Morland in her infancy would have supposed her born to be an heroine. Her situation in life, the character of her father and mother, her own person and disposition, were all equally against her."