The Jane Austen Picnic: A Recap

"He was a blessing to the juvenile part of the neighborhood, for he was for ever forming parties to eat cold ham and chicken out of doors."
Sense & Sensibility, on Sir John Middleton
And that is just where we (my mother and myself) seemingly found ourselves when attending the P.E.E.R.S. Jane Austen picnic, at one of Sir John's delightful parties! Only, instead of in the country surrounding Barton, we were in Lincoln Park of Alameda, California. One would certainly be hard-put to find a difference between the two settings by merely examining photos from that delightful event, for nearly all it's attendants were attired in empire gowns or wool frock coats and breeches, and our lunches laid out on china plates with silver ware.
See for yourself!:

The festivities began with the eating of "cold ham and chicken" out of doors at eleven o'clock, and lasted until two, when the dancing began. 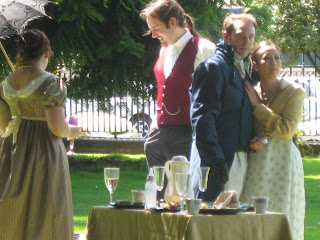 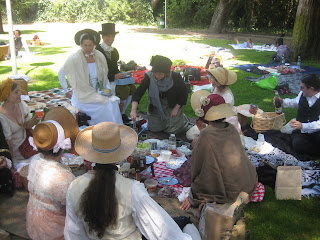 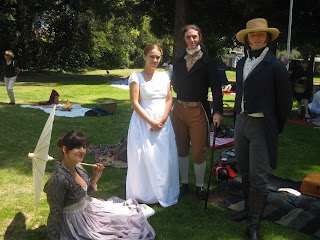 
When most of us gathered had finished our luncheon, the announcement came that the dancing was  to begin! 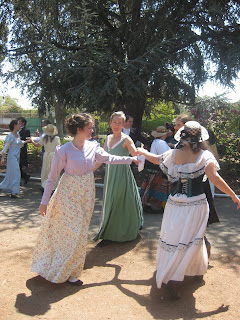 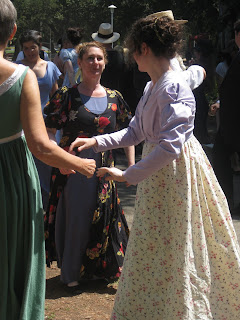 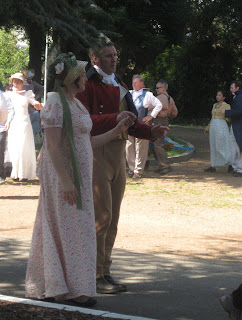 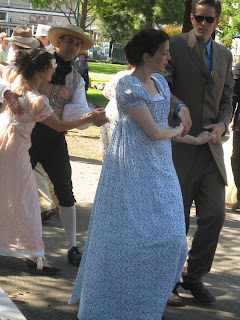 Some more examples of the lovely gowns and smart suits in attendance: 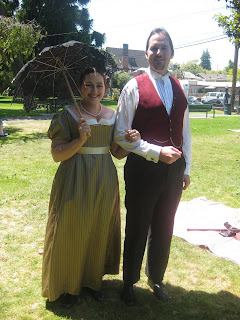 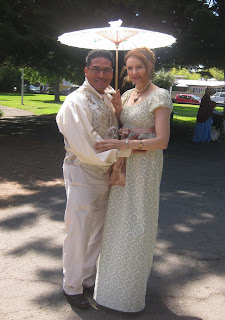 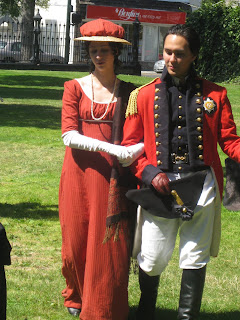 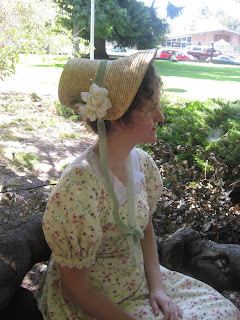 The festivities ended at four o'clock or thereabouts with one last waltz. We then expressed our appreciation for the musicians, packed up our plates and "called for the carriages" before heading home.

Posted by Lady Anna of Thither at 12:24 PM No comments:

[I'm a little behind with my posting -- my apologies! But hopefully I'm back on track, now.]


And now to the completion of our P&P study at the book club: We resumed our discussion using the questions previously handed out, which proved to be immensely interesting and insightful. Circles of chairs were scattered about the hall, almost completely filling it, and discussion filled the air! With the echo it was sometimes difficult to hear what the ladies in my group were saying, especially across the circle. We arrived a little late, so I came in to find myself apparently in the middle of a  discussion of this question: "To whom would you least wish to be related -- Elizabeth's mother or Darcy's aunt?"

"To whom would you least wish to be related -- Elizabeth's mother or Darcy's aunt?"

As light-hearted as this question might appear, some very important observations arose from it. One is that Mrs. Bennet and Lady Catherine alike in that they are extremely intent on getting their daughters married to particular young men. I'd never really thought about that before! Now anyone who's read P&P knows that Mrs. Bennet employs all her powers to get Mr. Bingley married to Jane. Yet the earnestness of Lady Catherine is hardly less, when you consider she traveled all the way to Longbourn to make Lizzy promise not to marry Mr. Darcy because, as Lady Catherine angrily points out, "he is engaged to my daughter." Someone observed that Lady Catherine is herself quite un-intentionally instrumental in bringing Lizzy and Mr. Darcy together. For example, while they are both staying in Kent Lady Catherine invites Lizzy to Rosings often and Mr. Darcy has ample opportunities to meet her walking in the surrounding countryside. These meetings reach their climax with the disastrous first proposal and the ensuing letter which turns out to be the catalyst for both Lizzy and Mr. Darcy to begin seeing themselves as they really are and thus to their being finally drawn together. Of course we all remember the effect on Mr. Darcy of Lady Catherine's visit to Lizzy '"It allowed me to hope,' said he, 'as I had scarcely ever allowed myself to hope before.'"


'"It allowed me to hope," said he, "as I had scarcely ever allowed myself to hope before."'

Someone made the point that Lizzy is able to see more clearly, from reading Mr. Darcy's uncomplimentary description, how socially deficient her family really is. She'd always thought their behavior to be mortifying, but to think something to oneself is one thing; to hear it from an outside observer is quite another altogether! This realization cannot help but make small inroads toward softening Lizzy's opinion of Mr. Darcy's character. His observation of Jane's behavior, though partial, helps Lizzy to see how Jane is seen by other people, that her reserved nature does not convey an appearance of strong feeling to outside observers. This insight also aids in softening her opinion towards Mr. Darcy. Someone pointed out that Mr Darcy has a personality very similar to Jane's, another thought that had never occurred to me! Just as Jane's reserved is misread, so is Mr. Darcy's -- only instead of being seen as having a lack of strong feelings, as in Jane's case, he is seen as an uncaring and haughty man.


A discussion of Charlotte's and Lizzy's views on marriage then took center stage in our circle. How aware was Charlotte of what she was getting into? We all seemed to decide that she was quite aware, and had planned to find contentment in keeping a good household rather than in having a husband who is equal in mind and goals. "But were they really so incompatible, with not a single goal in unison?" someone wondered. (For, we all agreed, a common goal is indispensable to a successful marriage). Their marriage would not  necessarily be labeled an unsuccessful one; they don't seem to have argued or even complained. Their goal seems to have been to have a suitable marriage, as far as society's standards went, in regards to income, property, comfortable provision and producing an heir. Voila! With all those things present, we can just pronounce their marriage to be successful, and move on... Or can we?


While looking at Lizzy and Mr. Darcy, I believe some criteria should be added to what constitutes a successful marriage. Lizzy was looking for something more than Charlotte: a man who could meet and help provide for her needs on deeper levels, such as emotionally and in rational conversation. And of course she wanted romance! We all know that Mr. Collins falls short in all these categories. Jane Austen tells us that Lizzy and Mr. Darcy bring elements into their marriage that will add to it and improve each other.

"It was a union which must have been to the advantage of both; by her ease and liveliness, his mind might have been softened, his manners improved; and from his judgement, information and knowledge of the world, she must have received benefit of greater importance."

There could not be a much happier ending to a book or discussion than that!
The discussion time having ended, the entire room then cleared their chairs away, making ample space down the gallery for a short and comprehensive lesson to us all on English Country dancing! This was provided by a group connected with the Sacramento Country Dance Society (or SCDS). After a demonstration, they called everyone on to the floor to join in. What great fun! There were smiles and laughter everywhere as we all tried to remember what we were supposed to do. I've never seen such long lines of dancers! Except for the missing period clothes and the sideboard with a bowl of punch, the long gallery with it's balcony above and live music below, almost transported me back to Regency England! 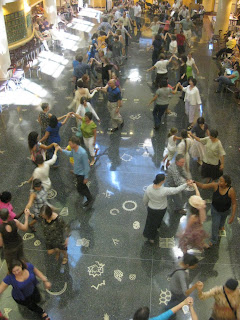 A view of the dancers from the balcony 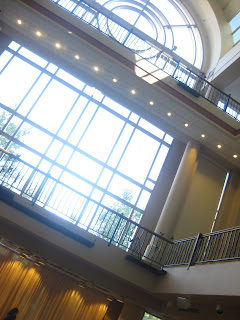