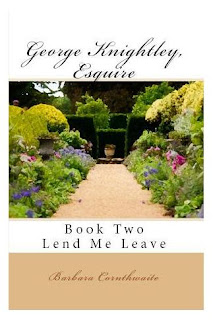 The eagerly anticipated second book in this Mr. Knightley set is here at last for us to enjoy.
Unlike Emma Woodhouse - who could never keep up a steady course of reading - once I have this book in my hands, it will be difficult for me to keep a steady course in anything else! Although I have a feeling that Emma would have read this one quite as steadily as I will...
Now available for your enjoyment in our Thither shop:
The Thither Shop
Posted by Lady Anna of Thither at 12:24 PM No comments:

To see our current newsletter: Click here
When you sign up to receive our newsletter you will get:
- An email newsletter mailed to your inbox bi-monthly

- Each newsletter will contain links to:
- Occasional update emails on new products and services in our shop

- The easy option to unsubscribe at any time

- Most of all we hope a diverting and informative email relationship with the ladies of Thither!

For Email Marketing you can trust
Posted by Lady Anna of Thither at 2:24 PM No comments:

_____________________
Part two of Emma from Mr. Knightley's perspective will be for sale on August 25th! And Thither is going to carry it.
Take a look at the cover here: Crownhill Writers Blog
If you are an admirer of Mr. Knightley and have not read this book, you must read it. No question. I enjoyed every word of it! I have a very, very high standard for any portrayal of my favorite hero, and Barbara Cornthwaite's Mr. Knightley does not fall short of it.
The story of Emma from his point of view can have somewhat of a potential to be boring. It could just be written as Mr. Knightley walking from Donwell to Hartfield, dining here, having this conversation there; it could get very monotonous. But that is far from the case here! Ms. Cornthwaite has captured the cheerful, clear-sighted squire of Donwell, who never misses a person's absurdities (especially Emma's). His banter with Emma and his brother, John, had me laughing out loud. I gained a deeper understanding of why he loves Emma, as well; which, as readers of Emma know, can be rather hard to see. She captures his humane side, too, as he takes care of his tenants, and is concerned about Emma and tries to guide her and protect her from her own foolishness or Mr. Elton's social-climbing or Frank Churchill's trifling gallantry.
After every well-known scene I found myself eagerly anticipating the next because what I had just read was so well-written and had completely delighted me. When I had finished it, I was more enamored of Mr. Knightley than ever.
Posted by Lady Anna of Thither at 6:26 PM No comments: