The Wit of Elinor Dashwood 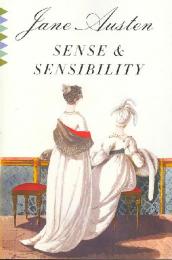 Reading through Sense and Sensibility I am always caught off-guard by Elinor's hilarious comments. She is generally considered to be made up entirely of sense, and for good reason, but we often forget her sharp and perceptive humor. (Humor not unlike her creator, Jane.)
To assist in spreading the appreciation of her wit I would like to post one particularly humorous exchange with her youngest sister Margaret:

"'Oh! Elinor,' she cried, 'I have such a secret to tell you about Marianne. I am sure she will be married to Mr Willoughby very soon.'

'You have said so,' replied Elinor, 'almost every day since they first met on High-church Down; and they had not known each other a week, I believe, before you were certain that Marianne wore his picture round her neck; but it turned out to be only the miniature of our great uncle.'

'But indeed this is quite another thing. I am sure they will be married very soon for he has got a lock of her hair.'

'Take care, Margaret. It may be only the hair of some great uncle of his.'"

Posted by Lady Anna of Thither at 12:11 PM No comments: